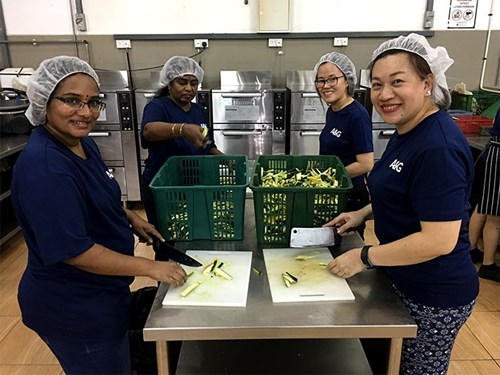 For four consecutive years, our Firm partnered with Willing Hearts to prepare meals for the needy under its Soup Kitchen programme. Beneficiaries of the programme include the elderly, the disabled, low income families, children from single parent families or otherwise poverty stricken families, and migrant workers in Singapore. Volunteers from our Firm spent an afternoon assisting in the preparation of ingredients for meals.

“It was meaningful to be able to give back to the community and hear the heart-warming stories of the regular volunteers, and also interact with colleagues from various other departments in the firm.” - Senior Associate from Litigation & Dispute Resolution Department One of the first CSR initiatives of Rahmat Lim & Partners (our associate firm in Malaysia) was contributing financially to the Young Diabetics Support Group, Tuanku Mahriz Chancellor Hospital, UKM Medical Centre in 2012. RL&P has since sent volunteers regularly to participate at the Children’s Diabetes Camp organised by the Young Diabetics Support Group. The camp aims to develop the skills and confidence required for young diabetic patients in managing their diabetes through educational and fun-filled activities.

In 2019, RL&P raised the sum of RM19,613 for the Support Group, part of which went towards sponsoring the Diabetes Camp, with the surplus being utilised to purchase glucose strips for the children in need. The camp was held on 14 to 15 September 2019 at Eagle Ranch Resort, Port Dickson. Children between the ages of 6 to 18 years old attended the camp which was facilitated by healthcare providers, representatives from the diabetic healthcare industry and four volunteers from RL&P.

The camp hosted informative sessions on hyperglycaemia and hypoglycaemia management which covered methods on how to calculate glucose levels in the blood, and appropriate insulin dosage to be taken before each meal based on different food categories. It was insightful to learn the dietary restrictions of a diabetic patient.

The children and facilitators participated in the various activities organised by the committee, which ranged from icebreaking sessions to mini-workout and dance sessions. One of the highlights of the camp was the tele-match, which encouraged the participants to compete for the top prize. While the young participants raced enthusiastically against each other, they were also cautioned to be aware of signs of hypoglycaemia and were reminded to be proactive and independent in managing their own diabetes.

A prize giving ceremony was held as a fitting close to the two-day camp. Awards were given to recognise participants with the best glucose control throughout the camp and the winners of the tele-match. The participants left the camp with goodie bags provided by the sponsors and smiles on their faces knowing that the knowledge gained and the friendships formed over the short two-day weekend could last them a lifetime.